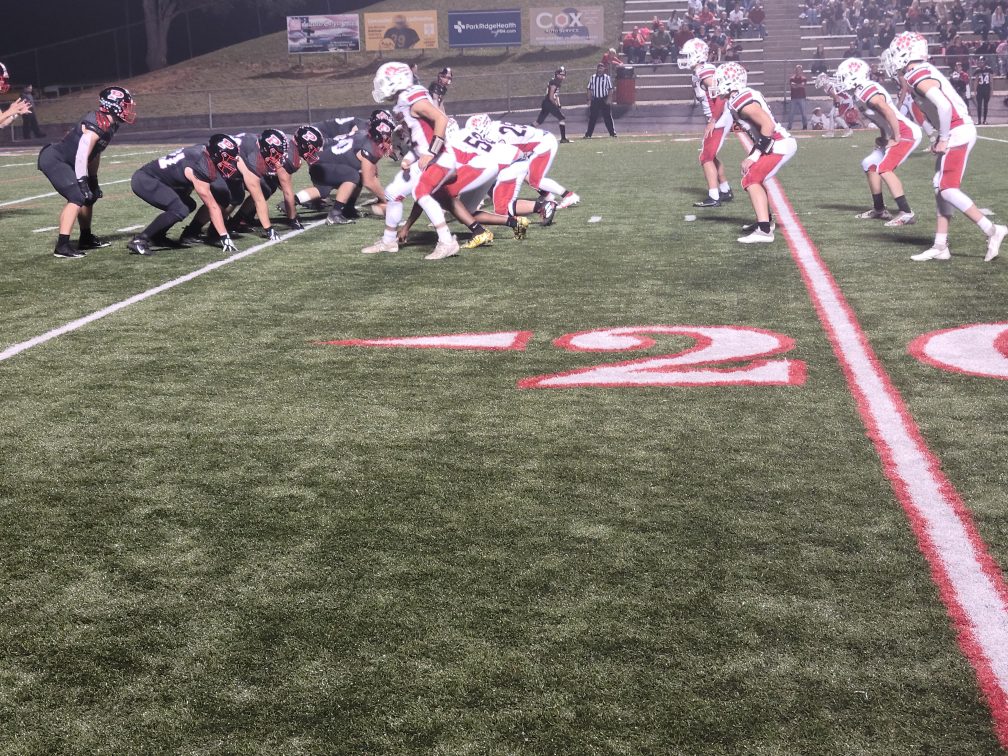 On a beautiful night, clear skies and a huge fan base from both sides, fans were ready for some football.

Franklin won the coin toss and deferred to the second half. Pisgah took the opening drive 3-plays and were forced to punt. After the punt, Franklin received the football on their own 29-yard. They went 3-and out and were forced to punt the ball back to Pisgah.  A short punt gave the Pisgah Bears the football on their own 47-yard line.  Pisgah marched the ball down with a good combination of run and pass, assisted with a defensive pass interference call.  With 4:04 left in the first quarter, Pisgah runs the ball in from the 5-yard line scoring the touchdown.  The Extra-Point was no good.  0-6 Pisgah.

After the kick to the Panthers, they start their possession on the 30-yard line.  First play Franklin’s Quarterback runs a quarterback keeper for 40 yards.  After some short passes and power runs, Quarterback Chris McGuire runs a Quarterback sweep for a Panther’s touchdown with 1:34 remaining in the quarter.  Extra-point was no good which ties the score 6 apiece.  Score stayed the same for the remaining time left in the quarter, Franklin 6 – Pisgah 6.

Pisgah assumes the ball to start the second quarter and marches all the way down to the Panther’s 4-yard line.  The Panthers make a huge stop and potential Pisgah touchdown and Panther’s take over on their 4-yard line. After a good long drive from the Panthers, they punted the ball Back to Pisgah with 4:34 left, in the quarter. After 3 and out, Pisgah is forced to punt back to the Panthers.  The punt was short and gave Franklin excellent field position. Franklin marches the ball down to the 15-yard line the drive stalls forcing a potential 34 yard field goal, Franklin’s  Munoz kicks a field goal right down the middle. Franklin takes the lead 9 Pisgah 6. Score stayed the same for the remainder of the quarter. Franklin 9 Pisgah 6 at the half.

Second half kick-off was possessed by the Panther’s at their own 27-yard line. Franklin puts together a great drive marching the ball down to the Pisgah 31-yard line.  With 9:34 left in the 3rd quarter, McGuire throws a 31-yard pass to Grant Adams for the touchdown, which was called back for an illegal player downfield. On the very next play, Quarterback Chris McGuire throws an interception to end the drive. Pisgah bears take over on their own 34-yard line.  Pisgah Bears marched the ball down on Franklin, mostly on power runs, and pushed the ball down to the Franklin 8-yard line.  Once again, the Panther’s stand strong on a 4th and 1, and Pisgah turns the ball over on downs.  Franklin goes 3 and out and kicks the ball from their 17-yard line, #9 Munoz booms a huge punt over the receiving teams head for a 62-yard punt, which backs the Pisgah Bears to their 27-yard line.  Pisgah runs 2 plays and then throws an interception to Franklin, the Panthers take over at Pisgah at 30-yard line. Franklin drives the ball down to the 17-yard line, Franklin goes for a fourth and 3 and it fails. The Pisgah Bears who start their possession at their own 18-yard line with :50 left on the clock. Pisgah picks up a first down at the franklin 45 which ends the third quarter. Franklin leads Pisgah 9 to 6.

In the 4 quarter after a couple of first downs Pisgah is forced to punt the ball to Franklin. After a great drive by the Panthers, assisted by several Pisgah penalties and excellent running plays, Henley runs the ball in from the 2-yard line for a Panther’s touchdown.  With the extra point good, Franklin leads 16-6 over the Pisgah Bears.  At 9:56 Panther’s kick to the Bears who start their drive at their 38-yard line.   Pisgah marches the rock down the field mostly by short passing schemes and strong power rushing in the middle of the field. On the 11th play of the drive, Pisgah’s number 8 Elliott punches the ball in from 3 yards out resulting in a Bears touchdown.  Extra point was good, with 7:13 left in the game the new score is Franklin 16 and the Pisgah Bears 13. Bears kick off to the Panthers who assume possession at their own 20-yard line. Franklin picks up 17 yards and is forced to punt the ball back to the Pisgah Bears. Time winding down in the game Pisgah assumes the punt at their own 42 yard line, 5 minutes left in the game Pisgah marches the ball down deep into Panthers territory ,  With 1:34 left Pisgah QB throws the ball over the top of The Franklin cornerback for the touchdown of 31 yards to take the lead in the game the extra point was good  Franklin kicks the ball back to Pisgah and starts their drive from their 4the new score is Pisgah 20 and Franklin 16.  Pisgah kicks off the ball and Franklin returns the kick to their own 36-yard line.  With 59 seconds remaining in the game. Franklin on some quick passes and getting out of bounds, Franklin was able to get to the Bears 30-yard line with :28 left.  Franklin QB Mc Guire  throws two deep passes to end zone that were incomplete, on third down a Franklin receiver burns the Pisgah cornerback and was wide open only to  dropped the ball in the end zone which would’ve been a Franklin Panthers go ahead touchdown.  4th and 10 from the Pisgah 30-yard line, the Pisgah Bears dials up and all out blitz which sacked Franklin’s Quarterback Chris McGuire causing a fumble and recovered by Pisgah.  Time expires. Final score Pisgah Bears 20 and the Franklin Panthers 16 Pisgah goes to 5 and 1 and Franklin falls to 4 and 2.

Final notes:  two players of the game for Franklin were #9 Erick Munoz the punter/kicker for excellent punting and great field goal kicking.  And the co-player of the game goes to #72 Nick Sanders who made numerous tackles on defense and stopped 2 crucial 4th and 1, plays.   Franklin Special Teams played much better this week. However, the late cornerback coverage was single man to man was unsuccessful for the second game in a row. Most teams double cover the deep threat from getting behind the coverage, so this doesn’t happen. When a team is leading late in the game the cardinal rule is force everything in front of the coverage. Very physical game well played by both teams unfortunately a blown coverage and a dropped touchdown pass Franklin Falls short.