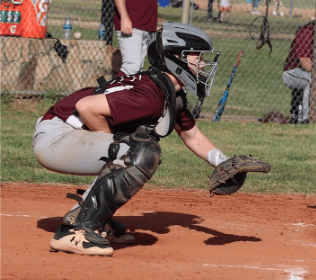 Bryson City- Maroon Devils Ace Charlie Collins was nearly un-hittable last night against Hayesville, and his performance on the mound helped the Maroon Devils come away with a 4-0 victory and jump into a three way tie for first place in the Smoky Mountain Conference.

The Swain County offense combined for 9 hits on the evening, but the most important one came off the bat of sophomore Carter Hayes. Hayes ripped a double to right field that scored Lawson Woodard and Cameron Blankenship. Carson Taylor then scored on a ground ball a few pitches later.

The Maroon Devils 4th and final run of the evening came in the bottom of the 6th inning when Gabe Lillard knocked a double to left field, scoring Woodard again.

Charlie Collins and Carson Taylor combined for a 7 inning shut out on the mound for Swain County. Collins got the win, lasting 5 innings while allowing 5 hits and and striking out 4. Taylor allowed 1 hit in 2 innings of relief out of the pen.

After the big win over Hayesville, Swain now finds themselves in a three way tie with Hayesville and Murphy for first place in the SMC.

Swain County will be back on the diamond on the 19th of April at home vs Cherokee.