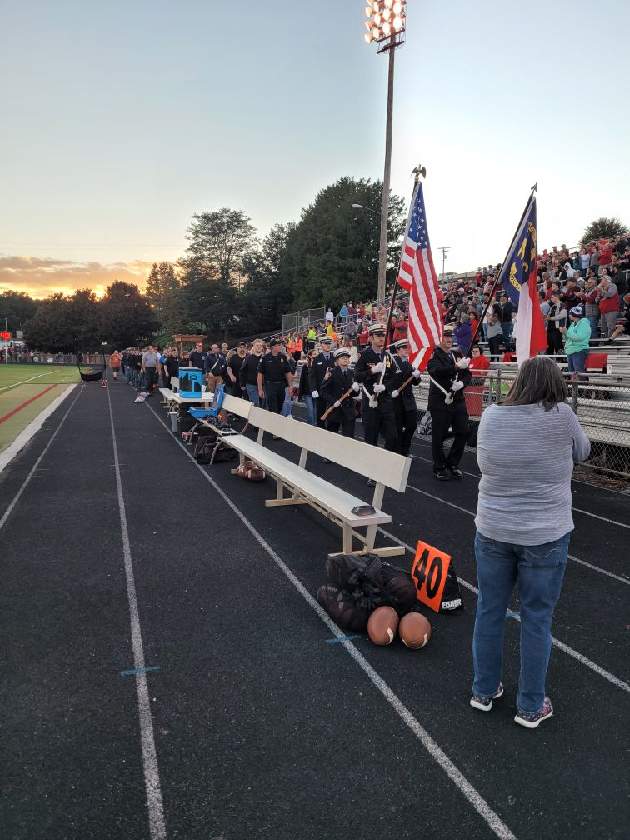 It was a beautiful night 60-degree weather for Homecoming of the Franklin Panthers.  The stands were full of eager fans, some celebrating a Class Reunion of 1986. Following a tribute to the First Responders the game got underway.

Franklin won the coin toss and deferred to the 2nd half. Tuscola received the opening kick-off and was forced into a 3 and out.  Franklin then took the punt and set up shop at the 36-yard line. Franklin went on a 13-play drive, culminating in a touchdown run of 2-yards by Brayden Watts, and Franklin takes the lead after a successful extra point leading 7-0 in the first quarter.  After a quick 3 and out the Mountaineers punted the ball back to Franklin, which ended the first quarter.  The score at the end of the 1st quarter was 7-0.

In the second quarter Franklin took a short punt to the 23rd yard line of Tuscola where they attempted a 38-yard field goal which was wide left, the score remains 7-0.  After some excellent defense from the Panthers, Tuscola Mountaineers was forced to punt.  On the ensuing drive, the Panthers sustained a serious leg injury to Brayden Watts at 7:35 left in the second quarter.  Watts sustained a serious leg or knee injury which halted the game for several minutes, until he could be carried off the field.

Franklin continued the drive to the Tuscola 21-yard line, where they were forced to attempt a field goal of 37 yards.  Munoz, the kicker for Franklin was successful, and Franklin took a 10-0 lead.  On the ensuing kick-off Tuscola #5 Lunsford promptly returned the kick-off 95 yards for a Mountaineer touchdown. The extra point was good, Franklin leads 10-7.  Franklin received the kick-off, and after a short 3 and out by both teams the half time score remained Franklin 10 – Tuscola 7.

At Halftime the Homecoming Ceremony began with Gracie Cochran being crowned the 2021 Homecoming Queen.  Second half began with Franklin receiving the ball at the 25-yard line.  Franklin was unable to move the ball on offense, and they were forced to punt.  After a short punt, Tuscola receives the ball on Franklin’s 45-yard line.  Tuscola moved the ball to the 11-yard line and Franklin caused a fumble which was recovered by Anders.  Franklin went on a drive, as the drive progressed Franklin was able to convert two 4th downs.

Seven seconds into the 4th Quarter Stiles ran the ball in for a touchdown from the 7-yard line making the score 17-7. After the touchdown, Franklin then kicked the ball off to #2 Benson from Tuscola who promptly returned it down the left side-line for a 94-yard touchdown.  The score is now 17-14.  Tuscola then kicked the ball back to Franklin which started the drive at their own 20-yard line.  After 3 plays Franklin was unable to pick up a first down and was forced to punt.  On the 4th down, Franklin tried a trick play to pick up the 2 yards which was unsuccessful, and Tuscola took over at their own 25-yard line.  The Special Teams for Franklin would end up costing them their undefeated season.  Tuscola was forced to try a 33-yard field goal which was missed wide-right, Franklin took the ball over at the Tuscola 17-yard line.

Franklin goes 3 and out and was forced to punt.  Tuscola started the drive at their own 47-yard line.  After a couple of Tuscola first downs, they threw a 34-yard touchdown pass over a tired Franklin defense. Tuscola 21 to Franklin 17.  Franklin received the kick-off and started at their own 36-yard line.  Franklin tried to mount a final comeback win and drove the ball down to their own 28-yard line where they had to use their final timeout. After unsuccessful runs and pass completions the clock expired, giving Tuscola the 21-17 win.